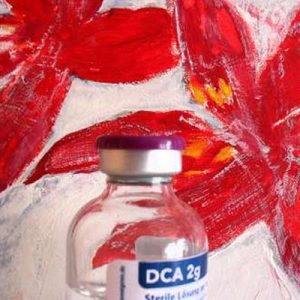 DCA (dichloroacetate, dichloroacetic acid) is an agent that has been used in the treatment of metabolic lactate acidosis for many years but has not been approved as a drug.

Research at the University of Alberta in Edmonton, Canada found cell cultures in which cancer cells were killed but not healthy cells.

Experiments also revealed that mitochondria (cell structures for energy production in the cell) which were considered to be damaged irreparably became functional again with DCA. Besides their role in producing energy in the cells, mitochondria are also responsible for initiating apoptosis – natural cell death – so this evidently results in death of the tumour cells.

In animal tests, it led to shrinking of malignant tumours.
Since DCA intervenes in tumour-specific fermentative metabolism and triggers apoptosis of the cancerous cell, it has now been used for some time in cancer therapy. Unfortunately, no official studies of DCA exist yet.

The occasionally occurring side effects such as nerve ending disorders recover gradually after administration of the substance is discontinued. Our Center for Advanced Medicine specialises in recognising and avoiding this side effect.