Curcumin is a secondary plant substance that is obtained from the rhizome of the turmeric plant (Curcuma longa). 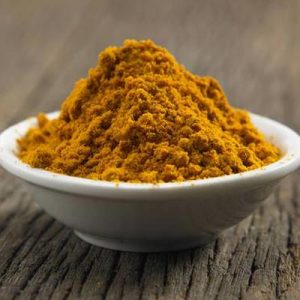 Curcumin is a secondary plant substance which is obtained from the rhizome of the turmeric plant (Curcuma longa). It is one of the main ingredients in the Indian curry spice mixture and is approved for use in the European Union as a yellow colorant under E-number 100.

Originally native to Asia, Curcuma longa now grows in many tropical and subtropical regions. As a remedy in ayurvedic medicine, curcumin is used particularly because of its<1073> antioxidative, anti-inflammatory, antiseptic, analgesic and anti-cancer properties</1073> in the treatment of bronchitis and asthma, allergies, liver diseases, rheumatism, infections of the upper throat as well as diabetes and cancer related wounds which are healing poorly. In India, where curcuma is a traditional food ingredient, the rate of affliction with breast, prostate, colon and lung cancers is ten times lower than in the United States. Many experts attribute this fact to curcumin.

It has now been proven repeatedly that curcumin is able to inhibit almost all of the signal paths for tumours, it prevents cell proliferation as well as tumorous invasion, metastasis and vessel formation. The chemopreventative activity of curcumin might be attributable to the fact that it induces tumour cell apoptosis via several signal paths (up-regulation of the tumour suppressor gene p53 and initiation of mitochondrial apoptosis through elevated bax production).

Since apoptosis is the primary cause of cell death, substances such as curcumin which can induce apoptosis / cell death are the most promising candidates for success in the treatment of cancer. Curcumin also retards NFkB (nuclear factor kappa B), which functions like a main switch in the cell nucleus for triggering the entire cascade of inflammation cytokines. These are responsible for the development and survival of cancer cells among other functions.

Like some chemotherapy agents, curcumin prevents tumours from creating their own blood supply by forming blood vessels: In this context, like bevazizumab for example, curcumin inhibits the vascular endothelial growth factor (VEGF) which is responsible for this.
Curcumin also acts as a tyrosine kinase inhibitor similarly to erlotinib and gefitinib, blocking epithelial growth factors (EGF) and thus preventing the division of cancer cells.
Curcumin is assimilated into the cell membranes of cancer cells and makes them more permeable and thus more vulnerable to attack by the immune system, biological cancer therapies, chemotherapy and radiation therapy.

In a study published in 2006 in the journal Clinical Gastroenterology Hepatology, a combination of 480 mg curcumin and 20 mg quercetin administered three times a day was shown to reduce the number and size of colon adenomas in familial adenopolyposis significantly without any sign of toxicity. Given the dosage quantities, Prof. Francis M. Giardelli is convinced that curcumin was the decisive substance.

Therapeutic use of curcumin

The plant itself only contains curcumin in a quantity from 2 – 9%. This is why its extracts are used in scientific research. One problem with the introduction of curcumin is its poor resorption from the intestine, which can be increased by adding piperine but does not result in sufficient active levels in the blood and other tissues.

At the Center for Advanced Medicine, we avoid this problem by giving patients curcumin as an intravenous infusion with 150 mg in an aqueous solution, which enables us to achieve high levels in tissue. With the intravenous administration of curcumin, we have an effective anti-cancer agent without any side effects at our disposal.
In the context of a holistic concept for an individually tailored cancer therapy we always use curcumin together with other substances.

Curcumin increases the chemosensitivity of treated tumour cells to Vincristin, Melphalan, Cisplatin and 5-FU and increases apoptosis induced by Paclitaxel.
However, it impedes apoptosis of mammary carcinoma cells induced by Irinotecan and Doxorubicin. In animal studies, it was also found to prevent regression of tumours under Cyclophosphamide.

Because of its syntagonistic and antagonistic effects, curcumin should therefore be used as adjuvant therapy only if it exhibits positive interaction with the following chemotherapeutic agents: